Researcher at Icahn School of Medicine at Mount Sinai 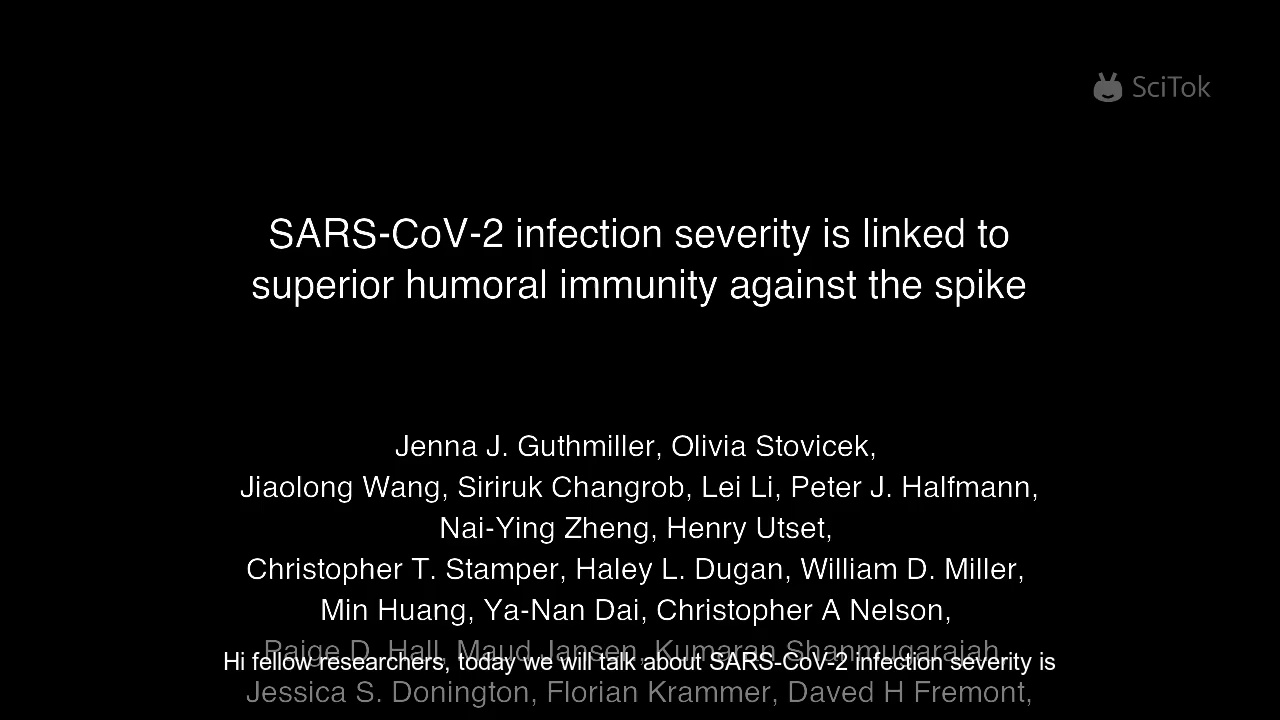 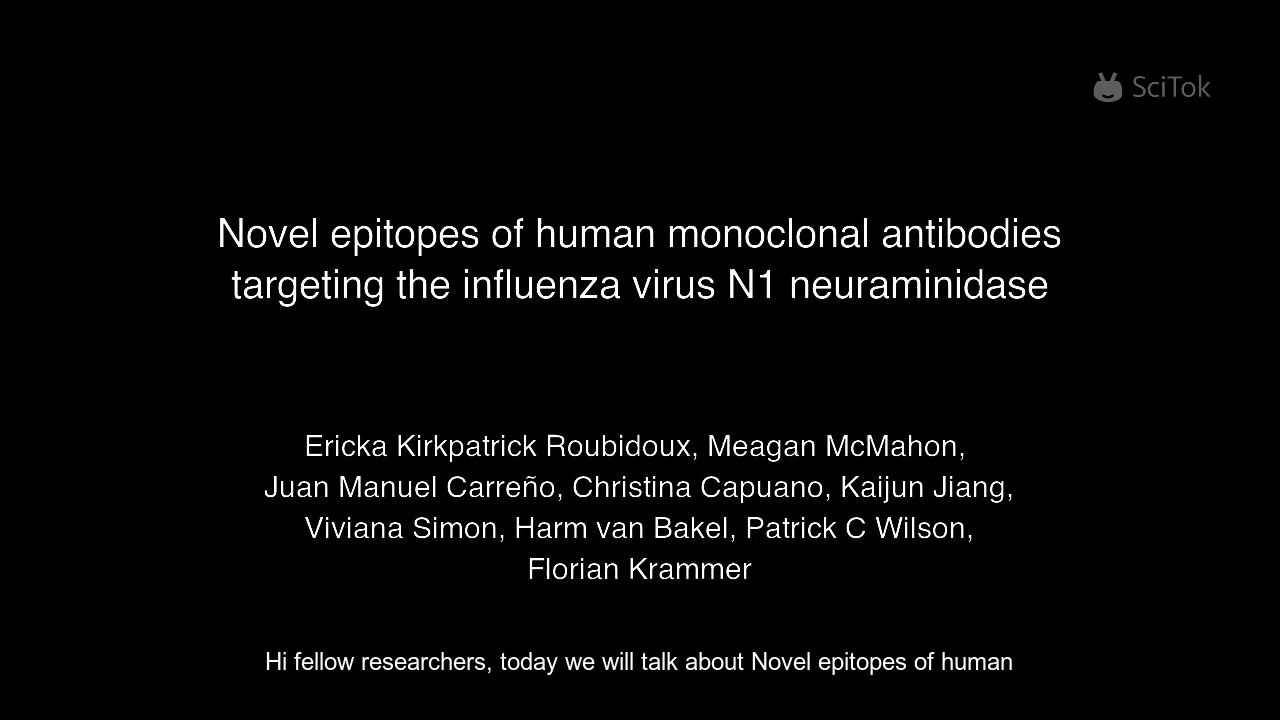 Influenza virus neuraminidase (NA) targeting antibodies are an independent correlate of protection against infection. Antibodies against the NA act by blocking enzymatic activity, preventing virus release and transmission. As we advance the development of improved influenza virus vaccines that incorporate standard amounts of NA antigen, it is important to identify the antigenic targets of human monoclonal antibodies (mAbs). Additionally, it is important to understand how escape from mAbs changes viral fitness. Here, we describe escape mutants generated by serial passage of A/Netherlands/602/2009 (H1N1) in the presence of human anti-N1 mAbs. We observed escape mutations on the N1 protein around the enzymatic site (S364N, N369T and R430Q) and also detected escape mutations located on the sides and bottom of the NA (N88D, N270D and Q313K/R). We found that a majority of escape mutant viruses had increased fitness in vitro but not in vivo. This work increases our understanding of how human antibody responses target the N1 protein. ImportanceAs improved influenza virus vaccines are being developed, the influenza virus neuraminidase (NA) is becoming an important new target for immune responses. By identifying novel epitopes of anti-NA antibodies, we can improve vaccine design. Additionally, characterizing changes in viruses containing mutations in these epitopes aids in identifying effects of NA antigenic drift. 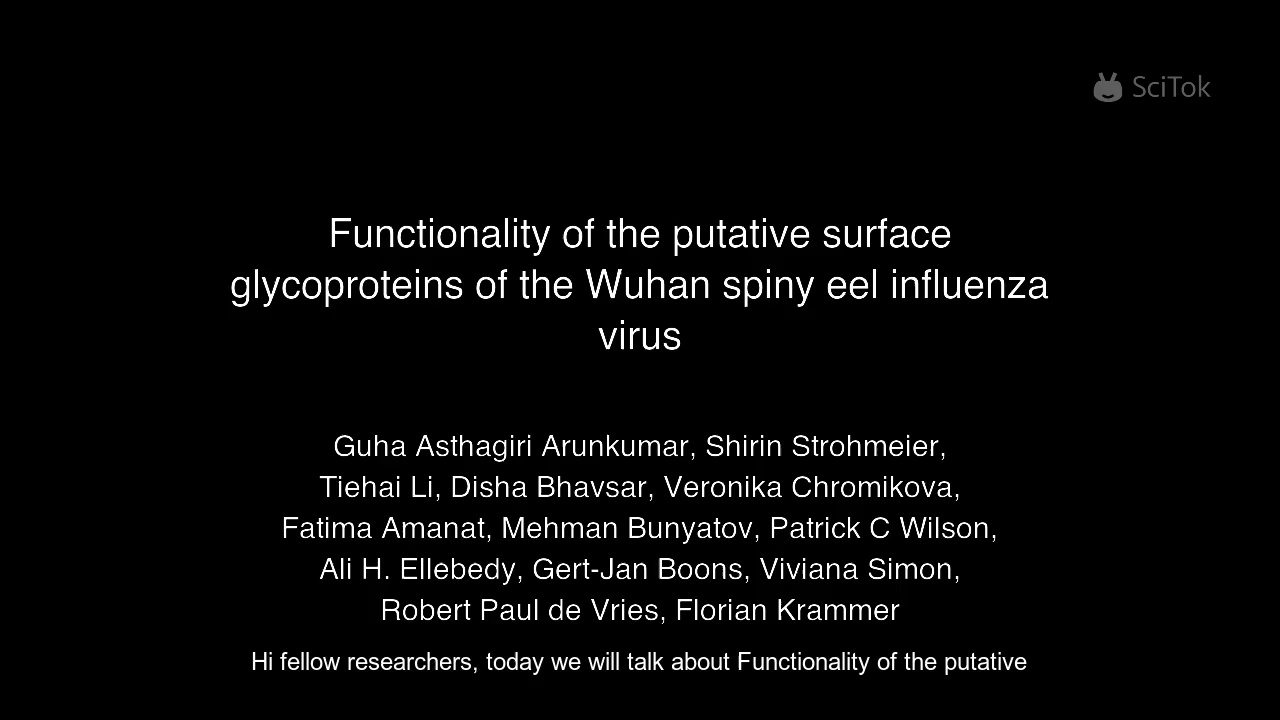 A panel of novel influenza-like virus sequences were recently documented in jawless fish, ray-finned fish, and amphibians. Of these, the Wuhan spiny eel influenza virus (WSEIV) was found to phylogenetically cluster with influenza B viruses as a sister clade. Influenza B viruses have been historically documented to circulate only in humans, with certain virus isolates found in harbor seals. It is therefore interesting that a similar virus was potentially found in fish. Here we characterized the functionality and antigenicity of the putative hemagglutinin (HA) and neuraminidase (NA) surface glycoproteins of the WSEIV to better understand this virus and its pandemic potential. Upon functional characterization of NA, we identified that the WSEIV NA-like protein has sialidase activity comparable to B/Malaysia/2506/2004 influenza B virus NA, making it a bona fide neuraminidase that could be inhibited by NA inhibitors. Testing of the functionality of HA was carried out including receptor specificity, stability, and preferential airway protease cleavage and showed very specific binding to monosialic ganglioside 2 (GM2). To probe the degree of conservation of target epitopes, binding of known broadly cross-reactive monoclonal antibodies targeting the influenza B HA and NA, respectively, were assessed through enzyme linked immunosorbent assays against recombinant WSEIV glycoproteins. Human serum samples of patients with antibodies to influenza B viruses were used to determine the cross-reactivity against these novel glycoproteins. Very few monoclonal antibodies - notably including pan NA antibody 1G01 - showed cross-reactivity and reactivity from human sera was basically absent. In summary, we have conducted a functional and antigenic characterization of the glycoproteins of the novel WSEIV to assess if it is indeed a bona fide influenza virus potentially circulating in ray-finned fish. 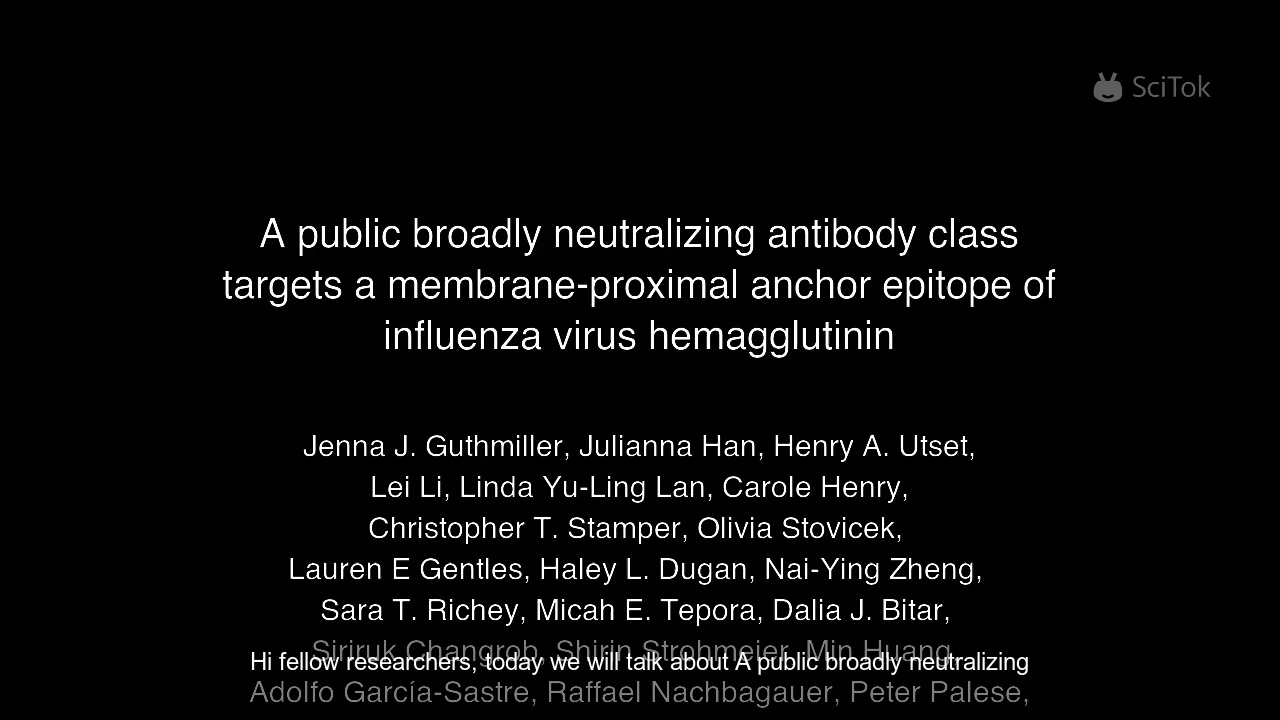 Broadly neutralizing antibodies against influenza virus hemagglutinin (HA) have the potential to provide universal protection against influenza virus infections. Here, we report a distinct class of broadly neutralizing antibodies targeting an epitope toward the bottom of the HA stalk domain where HA is "anchored" to the viral membrane. Antibodies targeting this membrane-proximal anchor epitope utilized a highly restricted repertoire, which encode for two conserved motifs responsible for HA binding. Anchor targeting B cells were common in the human memory B cell repertoire across subjects, indicating pre-existing immunity against this epitope. Antibodies against the anchor epitope at both the serological and monoclonal antibody levels were potently induced in humans by a chimeric HA vaccine, a potential universal influenza virus vaccine. Altogether, this study reveals an underappreciated class of broadly neutralizing antibodies against H1-expressing viruses that can be robustly recalled by a candidate universal influenza virus vaccine. 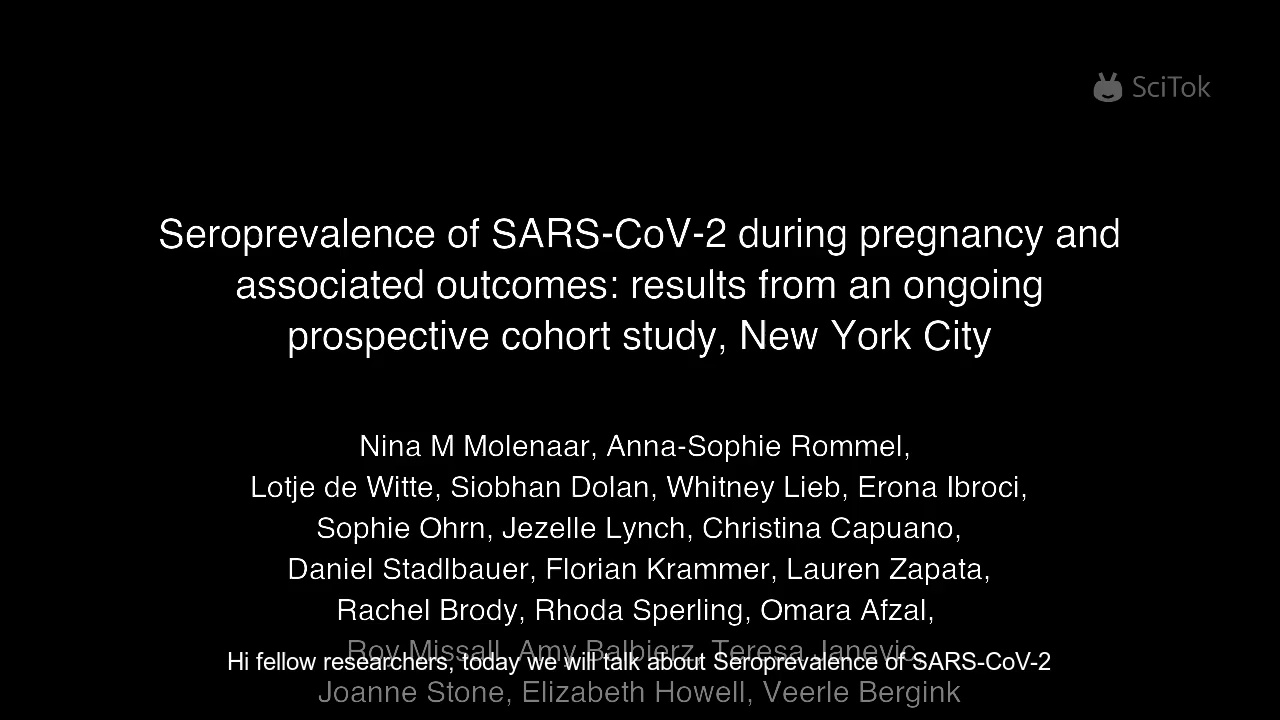 Background: In May-July 2020 in the New York City area, up to 16% of pregnant women had reportedly been infected with SARS-CoV-2. Prior studies found associations between SARS-CoV-2 infection during pregnancy and certain adverse outcomes (e.g., preterm birth, cesarean delivery). These studies relied on reverse transcription polymerase chain reaction (RT-PCR) testing to establish SARS-CoV-2 infection. This led to overrepresentation of symptomatic or acutely ill cases in scientific studies. Objective: To expand our understanding of the effects of SARS-CoV-2 infection during pregnancy on pregnancy outcomes, regardless of symptomatology and stage of infection, by using serological tests to measure IgG antibody levels. Study Design: The Generation C Study is an ongoing prospective cohort study conducted at the Mount Sinai Health System. All pregnant women receiving obstetrical care at the Mount Sinai Hospital and Mount Sinai West Hospital from April 20, 2020 onwards are eligible for participation. For the current analysis, we included participants who had given birth to a liveborn singleton infant on or before August 15, 2020. Blood was drawn as part of routine clinical care; for each woman, we tested the latest sample available to establish seropositivity using a SARS-CoV-2 serologic enzyme-linked immunosorbent assay. Additionally, RT-PCR testing was performed on a nasopharyngeal swab taken during labor and delivery. Pregnancy outcomes of interest (i.e., gestational age at delivery, birth weight, mode of delivery, Apgar score, ICU/NICU admission, and neonatal hospital length of stay) and covariates were extracted from electronic medical records. Among all Generation C participants who had given birth by August 15, 2020 (n=708), we established the SARS-CoV-2 seroprevalence. Excluding women who tested RT-PCR positive at delivery, we conducted crude and adjusted linear and logistic regression models to compare antibody positive women without RT-PCR positivity at delivery with antibody negative women without RT-PCR positivity at delivery. We stratified analyses by race/ethnicity to examine potential effect modification. Results: The SARS-CoV-2 seroprevalence based on IgG measurement was 16.4% (n=116, 95% CI 13.7-19.3). Twelve women (1.7%) were SARS-CoV-2 RT-PCR positive at delivery (11 of these women were seropositive). Seropositive women were generally younger, more often Black or Hispanic, and more often had public insurance and higher pre-pregnancy BMI compared with seronegative women. SARS-CoV-2 seropositivity without RT-PCR positivity at delivery was associated with decreased odds of caesarean delivery (aOR 0.48, 95%CI 0.27; 0.84) compared with seronegative women without RT-PCR positivity at delivery. Stratified by race/ethnicity, the association between seropositivity and decreased odds of caesarean delivery remained for non-Hispanic Black/African-American and Hispanic women, but not for non-Hispanic White women. No other pregnancy outcomes differed by seropositivity, overall or stratified by race/ethnicity. Conclusion: Seropositivity for SARS-CoV-2 without RT-PCR positivity at delivery, suggesting that infection occurred earlier during pregnancy, was not associated with selected adverse maternal or neonatal outcomes among live births in a cohort sample of women from New York City. While non-Hispanic Black and Latina women in our cohort had a higher rate of SARS-CoV-2 seropositivity compared with non-Hispanic White women, we found no increase in adverse maternal or neonatal outcomes among these groups due to infection. 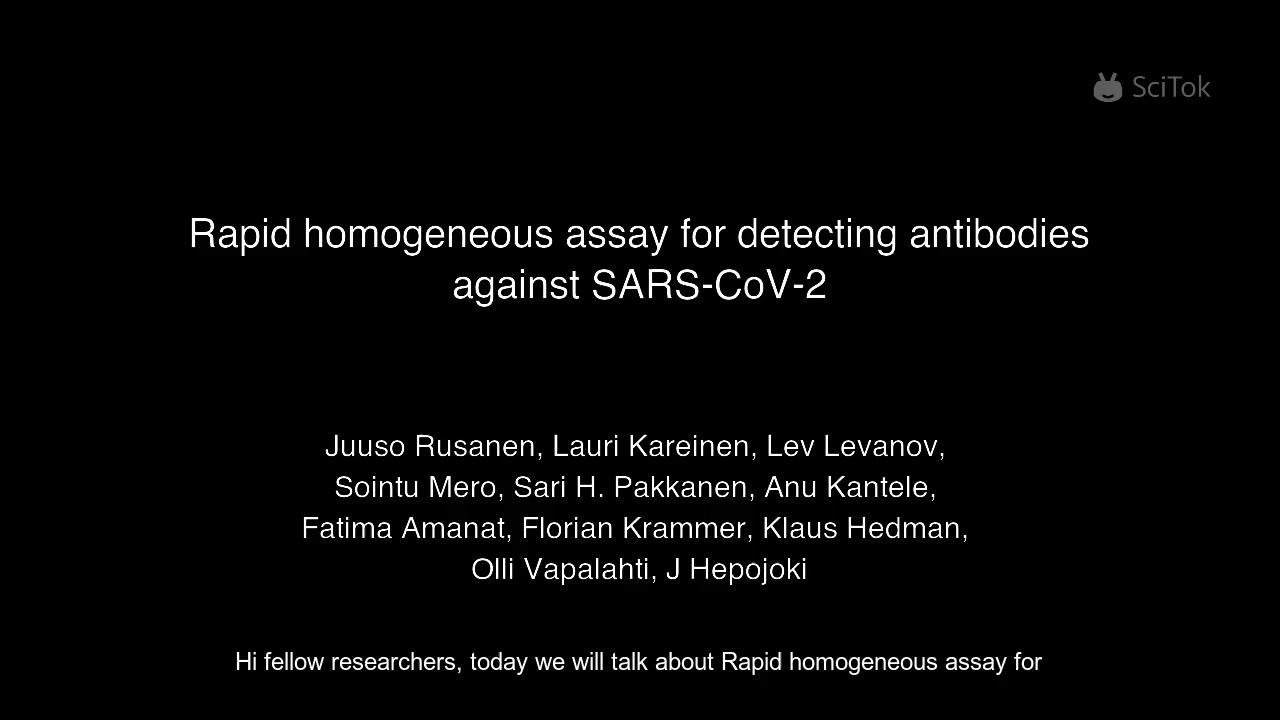 Accurate and rapid diagnostic tools are needed for management of the ongoing coronavirus disease 2019 (COVID-19) pandemic. Antibody tests enable detection of individuals past the initial phase of infection and will help to examine possible vaccine responses. The major targets of human antibody response in severe acute respiratory syndrome coronavirus 2 (SARS-CoV-2) are the spike glycoprotein (S) and nucleocapsid protein (N). We have developed a rapid homogenous approach for antibody detection termed LFRET (protein L-based time-resolved Forster resonance energy transfer immunoassay). In LFRET, fluorophore-labeled protein L and antigen are brought to close proximity by antigen-specific patient immunoglobulins of any isotype, resulting in TR-FRET signal generation. We set up LFRET assays for antibodies against S and N and evaluated their diagnostic performance using a panel of 77 serum/plasma samples from 44 individuals with COVID-19 and 52 negative controls. Moreover, using a previously described S construct and a novel N construct, we set up enzyme linked immunosorbent assays (ELISAs) for antibodies against SARS-CoV-2 S and N. We then compared the LFRET assays with these enzyme immunoassays and with a SARS-CoV-2 microneutralization test (MNT). We found the LFRET assays to parallel ELISAs in sensitivity (90-95% vs. 90-100%) and specificity (100% vs. 94-100%). In identifying individuals with or without a detectable neutralizing antibody response, LFRET outperformed ELISA in specificity (91-96% vs. 82-87%), while demonstrating an equal sensitivity (98%). In conclusion, this study demonstrates the applicability of LFRET, a 10-minute mix and read assay, to detection of SARS-CoV-2 antibodies.

Loading Projects...
Bulletin Board
Florian hasn't posted anything yet.